The public realm improvements were designed to enhance the wider environment with attractive places to spend outside of the office. The aim to create a greener, natural and more pedestrian friendly environment with a focus on well-being along the length of Kingdom Street and at Kingdom Square. 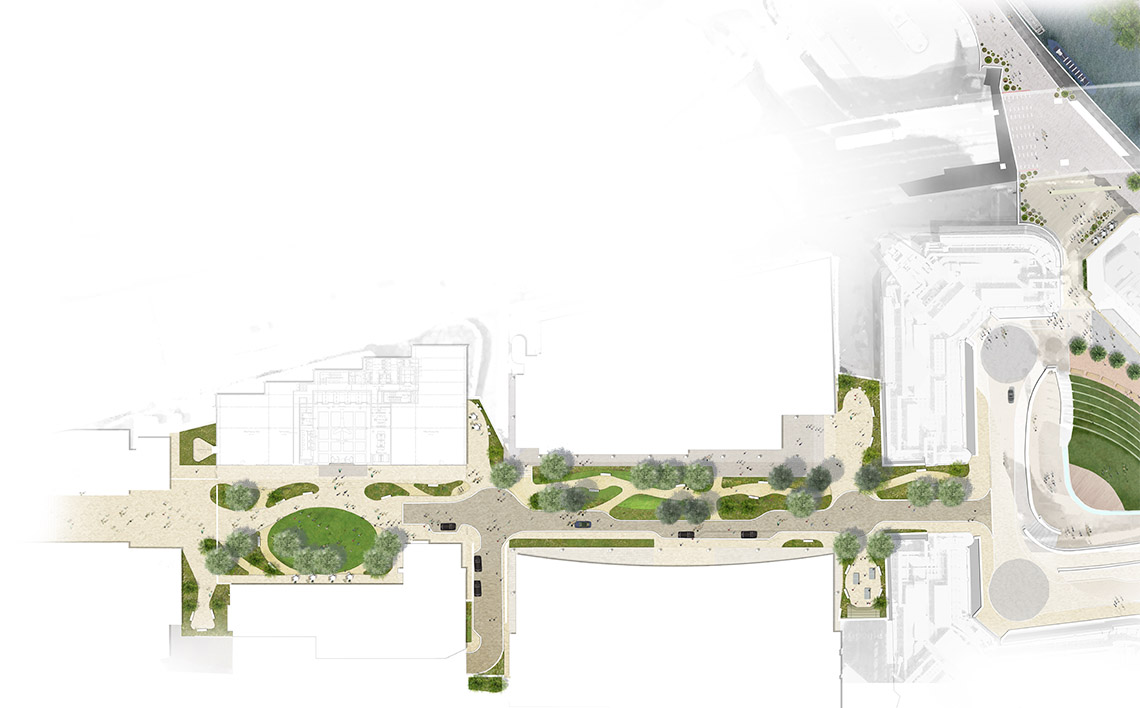 The public realm creates a linear 'woodland walk', a series of green garden spaces of differing sizes between Sheldon Square to the east and Kingdom Square to the West, allowing pedestrians to dominate the tranquil garden space, easily accessing the building entrances.
The predominant green space is the woodland garden along Kingdom Street, with smaller active spaces off the main garden space include a Games Room, a Kitchen Garden and smaller pocket gardens around building entrances. The original carriageway has been downplayed but still functional within the scheme. 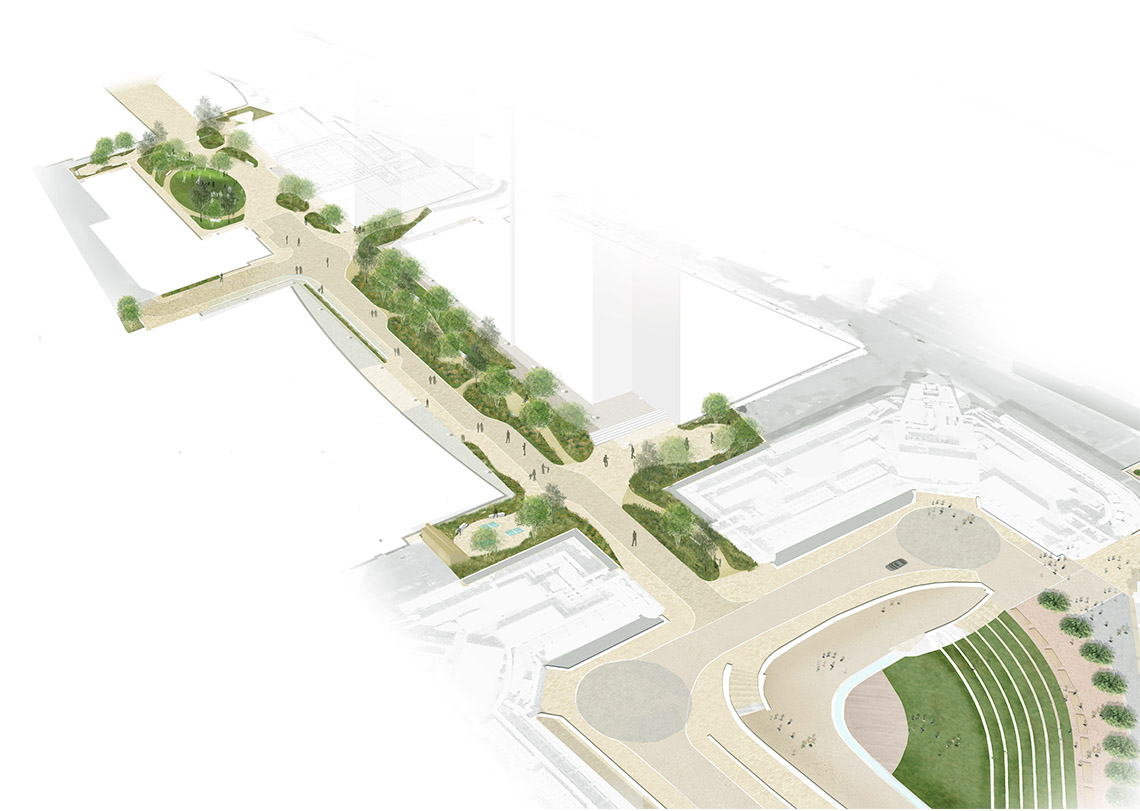 Kingdom Street was originally dominated by a central carriageway, flanked by dark grey planters and footpaths that created a barrier to pedestrians. There were limited spaces for people to dwell, and the few there were, felt open and exposed. The predominantly hard surfacing of the paving and buildings throughout Kingdom Street also created a wind tunnel effect and uncomfortable micro-climatic conditions. This, coupled with the fact it was a vehicle dominated space, gave the street a cold and bland feeling.
The original carriageway was moved into the more shaded side of the street, and narrowed with passing places, to calm traffic.
Primarily for taxis and bicycles, the road has been designed as just a single carriageway to encourage vehicles to travel at reduced speed. The kerbs are flush with the paving and surfaced with stone setts to reinforce a pedestrian priority area. 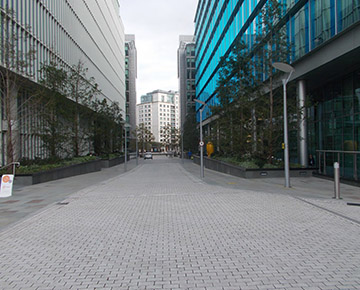 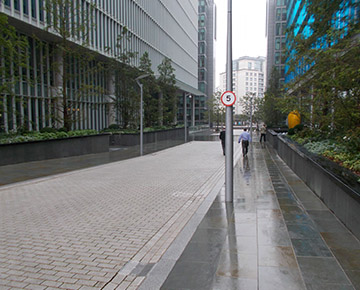 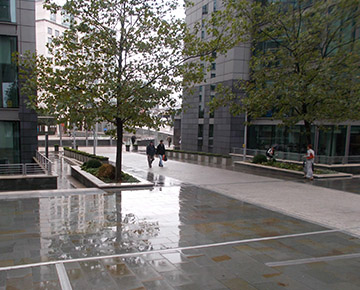 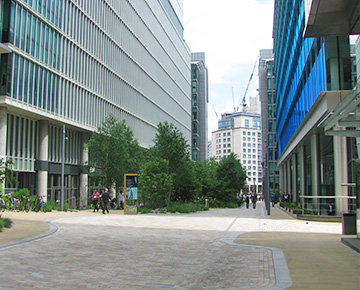 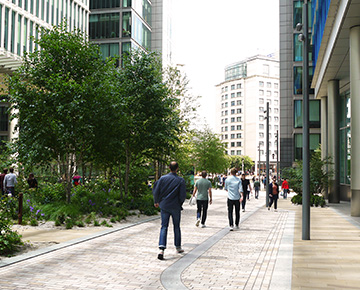 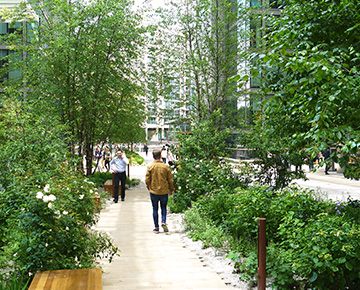 The Woodland Garden of Kingdom Street

The linear garden has created an attractive landscape along Kingdom Street. A sinuous pedestrian pathway, paved with small Yorkstone paving units, winds its way through a woodland garden, creating curved pockets for seating, with framed views of building entrances.
Trees and specimen shrubs planted on mounded planting areas creates a sense of enclosure along the walk. The trees are under-planted with predominantly woodland species to work in the shade. A thicker, mounded lower level planting along the northern side of the garden creates an additional buffer to ground floor uses and windows. 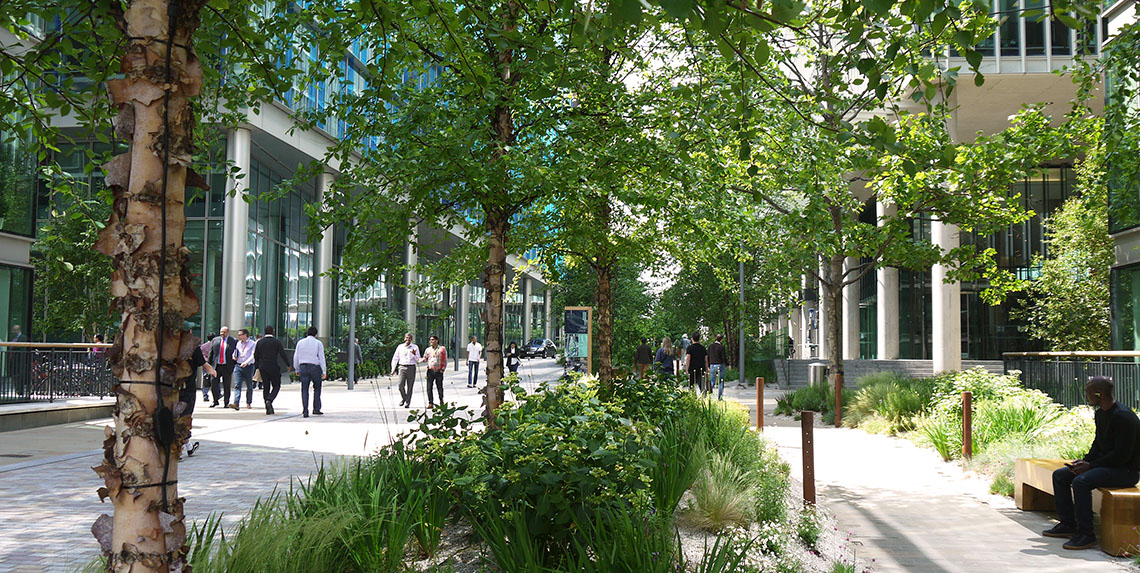 The Games Room is the south-eastern sub-space, a place for people to socialise. The central section is reserved for outdoor games such as table tennis. It is enclosed with planting to the east and west while on it's the south side timber clad seating steps will allow people to watch games from an elevated position, while also offering longer views.
The design of the games spaces have been developed to encourage people to use the public realm as a more social and broader environment, not just a route to the front door. 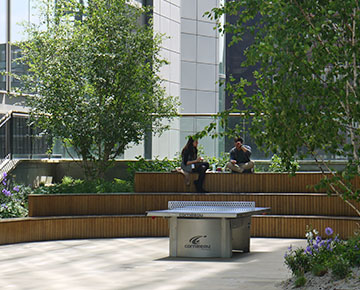 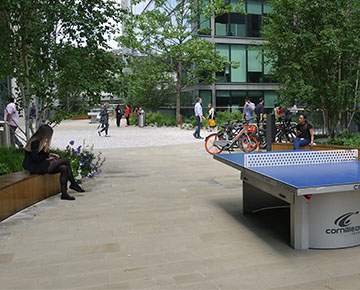 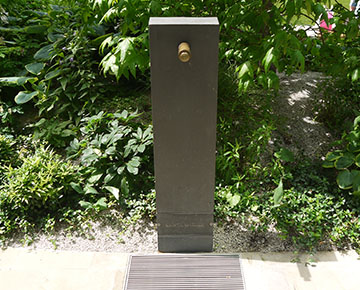 The Library area is located to the north east of Kingdom Street, beside the entrance to 2 Kingdom Street.
This pocket space has seating and is designed for people to spend time reading and working outdoors. Thicker planting around the perimeter provides a visual buffer between the public realm and office spaces, sheltering the space.
The seating within the spaces has been designed as part of the planter edges so that users can sit in close proximity to the planting. In the library, individual seats allow people to sit on their own, while longer benches cater several people to sit together.

The kitchen garden connects to the main planting scheme of Kingdom Street, and where edible plants have been incorporated into the planting palette of the stacked green walls. The aim of the Kitchen Garden is to encourage people to engage with the planting, to touch, taste and smell.

The new sinuous landscape of Kingdom Street culminates in Kingdom Square, designed as a local amenity space with a large flexible lawn for people to dwell that can accommodate small scale events and act as a visual amenity from the surrounding office buildings.
A central lawn mounded to create enclosure, forms the focus to the square. The lawn provides space for small scale events, as well as space for people to sit and enjoy the sun.
Further pocket spaces to the east and west are veiled with planting to provide more private seating areas and have complementary street furniture to Kingdom Street.
One of the sub spaces is a fire pit area, available for local community use and events. The planting within the square provides a soft edge to the buildings and design to provide plant interest throughout the year. 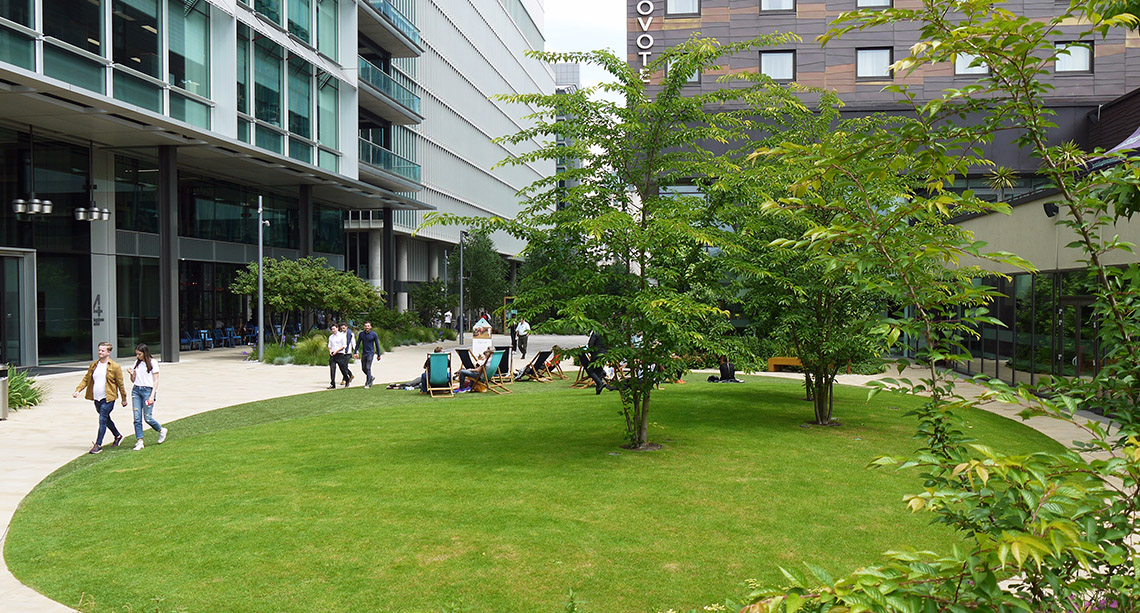